Austrian post-metal band BOG will release their new EP, “Remission,” on May 13th via Polawa Records. Initially founded by rhythm guitarist Tim Primbs as a one-man project, BOG is now a full five-person band providing a variety of dark, atmospheric melodies and monolithic, powerful riffs. We talked with Tim about their upcoming EP and many more in an enchanting interview.

Hi! “Remission” already presents itself as a material with one hell of a sound. Tell us a bit about it! Is there a hidden message behind it?

Hey! “Remission” is the first release of a planned trilogy. We’ve been very happy to have Will Benoit for mixing and mastering on board again. He made a great job!

In “Remission”, I’m telling a very complicated and personal story about the relationship between my father and myself. It’s about loss, grief, and the search for the own history. It’s a search of light in a place with a lot of shadows. If there’s a hidden message then I don’t have an answer where to find this message and that’s exactly what is “Remission” all about. It’s an ongoing evolution.

You’ll never stop evolving and you maybe find some spots of light in the dark. I was struck by a lightning about 10 years ago and had to fight my way back to life. I had a very intense near-death experience where I had an encounter with my father who died about a year earlier.

In retrospect, it was exactly what I wrote before. Finding light in the vicinity of shadows. It was and still is very inspiring for me.

How do you think the band’s sound has evolved over the years? Did you always have in mind to sound the way you sound today?

I think we’ve become more open and confident. I don’t want to plan how we should sound. I find that boring. It just happens. It’s a constant evolution and I’m happy with how everything turned out.

The hardest thing, apart from all the setbacks and false expectations, is recognizing and appreciating the small successes and not stopping everything.

How you define success is probably a very individual thing.

For me, it is a success to have the opportunity to share my art with other people. I am happy about every encounter with other people who have been touched by my music. We once played a show in front of four people on a tour. Of course, that dampened the mood a bit at first, but when I found out that these people had traveled several hours by car just to see us, it was one of the most beautiful evenings ever.

Of course, if I had the ambition to play in front of 1,000 people every day, we would have failed long ago.

It is important to remain the captain of my ship but the waves of information on the sea of ​​memories can sometimes be quite stubborn.

If you have something to say then it’s not impossible. Of course, you have to get used to it first. You make mistakes, you learn and you try again. Many people are thinking that the artist tries to be original but originality is probably the last element that develops in an artist. It just happens in the end. Or not.

Music has known a substantial change once with the evolution and development of technology. How do you see this change given that there where technology appears, the emotion may lose its course?

I see it as a very positive thing that access to making music is becoming easier and easier. You no longer need equipment costing several thousand euros. There is so much free knowledge on the internet. There are plenty of gatekeepers who want to tell you how to do things “right” but as soon as you ignore these bores, great things can happen. In the end, it all comes down to whether you have something to say or not. The tools are irrelevant.

Let’s get back to the new EP “Remission.” If you were to advertise it as a TV commercial, let’s say, what would you start with, and what would it look like?

Oh, dear, I haven’t even owned a TV for a few years now. I imagine the following scenario: Explosions, fire-breathing dragons, and Arnold Schwarzenegger yodeling on a Harley Davidson. The narrator then says “Don’t you know what’s going on? No? Well… then welcome to the club.”

Where do you think your music will find its fulfillment and inner peace if your music travels the world?

With the people who find themselves in the stories and concepts of BOG. People who love authentic and honest art. At least that’s what I’m trying to make.

I really just wish that people feel comfortable with the music. I also think that the situations are very different for everyone. The important thing is to have a good time. No matter in which context.

More than anything else, music is a feeling that connects you with nature and places you in the universe. However, do you consider that the artist thinks about this perspective in its time of creation? Can this feeling become a vanity that might be taken advantage of?

We are all the sum of our experiences and observations. We absorb information like a sponge. Sometimes consciously but more often unconsciously. We are surrounded by information and we cannot escape from it. At least I process these impressions in the creation phase. I can only speak for myself when I say that you should be careful not to be overwhelmed by certain feelings.

For me, it is important to remain the captain of my ship but the waves of information on the sea of ​​memories can sometimes be quite stubborn.

What do you feel is the best song you’ve ever released?

I would say that ‘Fellow Traveller’ from our debut album unshriven is my favorite. My best song, in general, is ‘Dead End’ from our new EP “Remission”. It’s a very personal song and it’s also my first time singing the clean vocals on a regular release. It was quite a challenging one but it worked out very well for me in the end.

What does it mean to play and live in the millennial generation of post-metal artists? What do you borrow from those who came before you, and what do you do to push the genre forward?

The most important thing for me is to be open to new developments in art and music. I think that live concerts bring the music to life. Unfortunately, it was not possible for most of the bands to play in the last two years. I’m afraid that it will affect the music landscape in the longer term. I can’t make any predictions yet, but I don’t have the feeling that it will be any easier than before.

Live concerts are also an opportunity to breathe new life into old material. It’s very fascinating what songs could sound like if you wrote them at different stages of your life. This is at least partly possible with live music.

The predecessors of our music created a foundation that we can now build on. Sometimes, however, it is necessary to tear down certain structures and leave the given path in order to develop something further. I’m not a fan of traditions. Traditions stand for a standstill and a succumbing to creativity and innovation. Let’s burn everything down and create something unique!

Well, the TV commercial with the explosions, the dragons, and Arnold Schwarzenegger would be very appropriate now.

Can I mention our imaginary TV spot again here? (laughs) No seriously. I do not know. I would invite everyone to drink a glass of grape juice (juice, not Wine!) with me and philosophize about life. If we came up with the subject, I would give him or her a CD or show her a video from BOG. I’m not a good seller. Especially not for my own art. I have never been able to get used to this task. I am a creator and not a seller. I invite everyone to take part. 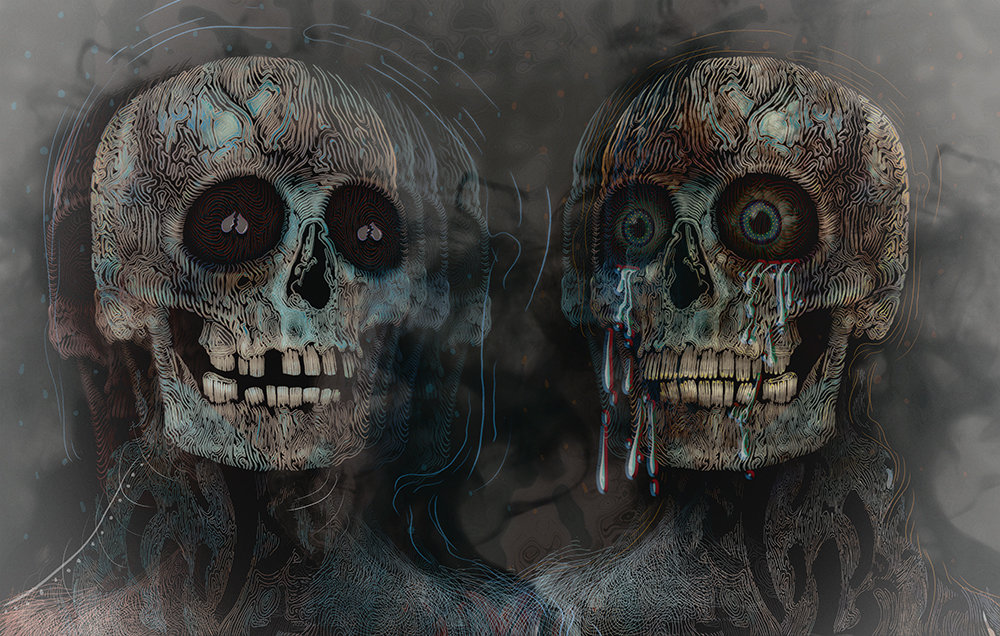 Garvin Tieseler, the Visual Artist who creates from his nightmares – interview 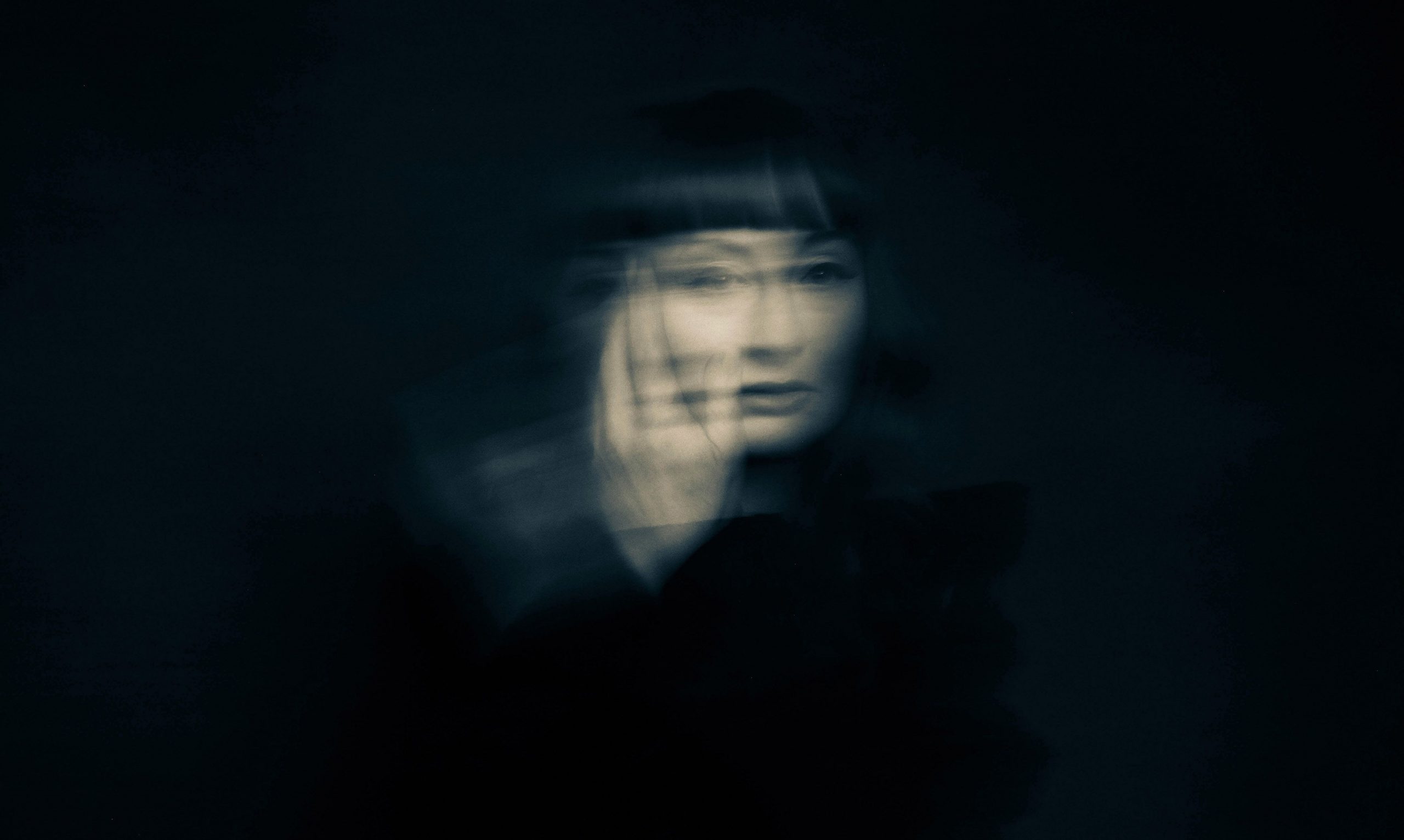