Season of Mist has just announced the signing of BASTARÐUR, the crust punk project of SÓLSTAFIR singer/guitarist Aðalbjörn “Addi” Tryggvason and Birgir Jónsson. The band will be releasing its debut album, “Satan’s Loss of Son”, on October 29, 2021. The first single, ‘Viral Tumor’, can be heard below: The track features guest […]

Mexican-American doomgazers LOW FLYING HAWKS has unleashed the second single ‘Caustic Wing’ taken from their forthcoming third full-length “Fuyu”, which has been slated for release on August 27. We wanted to go overboard with this track, so we did. It all started with this beautiful lick that AAL had kept since 2018, and some chord progressions. Those […]

HEAVY TEMPLE crash forth like a roaring mastodon in a thunderstorm with their first official full-length, “Lupi Amoris”, and it has all the makings of a landmark record. As progressive as BARONESS but unselfconscious, as heavy as FU MANCHU but more adventurous, this Philadelphia trio throws every lever in the riff-metal […]

Tyler Cantrell is a solo artist from Philadelphia, Pennsylvania, with musical styles ranging from acoustic rock to progressive rock-metal to electronic ambient rock. “Cloud Machines” is the first single from the upcoming full-length album, “Enigmatic”, releasing on Friday – 07/30/2021 and available for pre-order on Bandcamp here. Co-produced by Tyler Cantrell and Chris Bollinger.Drums – written […]

British Ambient/Post-Rock artist Dan Caine has just revealed a new track, ‘The Shores of Nowhere’, taken from his forthcoming album “Also Known as Life”. Dan Caine is an ambient/post-rock musician from Merseyside, England. Caine uses powerful, layered guitar melodies to create an atmosphere of an intense range of thought and […]

Norwegian post-black-metal newcomers Sundrowned have just revealed another new track from their forthcoming debut album “Become Ethereal”, which is set for release on June 18 via Fysisk Format.  With a sound reminiscent of bands like Alcest, Rosetta and Deafheaven, Sundrowned is primarily the solo project of Jone Amundsen Piscopo and is joined by Aron Eggertsson, Gabriel Innocent and Markus Jakobsen live and on the album. Listen to this new track titled “Ethereal” […]

‘Beta Pictoris’ is the fifth album that Martin Stürtzer and Christian Stritzel recorded as Sphäre Sechs. They pulled off an improvisational online concert played from two cities and gathered material in preparation for this event. Their approach to record music only during improvised studio sessions with a large set of […]

Tango With Lions is the stage name of Berlin-based singer/songwriter and multi-instrumentalist Kat Papachristou. She has released three albums via Inner Ear Records. Her debut album ‘Verba Time’ (2010) received enthusiastic reviews, while the song ‘In A Bar’ has broken a record of views on YouTube. Her second album ‘A Long […] 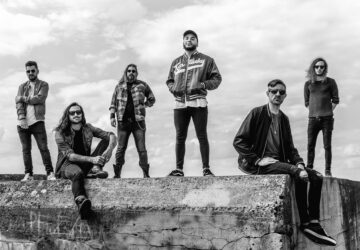