In a world where imagination is the definite form of creation, and we’re not referring only to art, but everything that surrounds us, the world’s complexity and the like, are nothing but images of ego. It’s a type of world where I am surrounded by my various forms.

However, there are some struggles, contradictions, unpleasant things that you share with others and, at some point you will understand why sometimes in this battle you’re fighting no one but yourself, it seems like you’re watching yourself into a mirror. “Everyone is the other and no one is himself.” (M. Heidegger) I think about this exact such struggle Raul Starcz‘s material talks about. That’s why I was drawn to it even more. I feel it and it feels almost physically, a feeling beyond normal reasons, beyond preconceived ideas, logic and known senses.

The first thought, the first cry of our soul is or may become a beast that devours your human being when you give it obedience. From this point forward I believe you can actually see the value of this piece of art.

I can tell you that the music is improvised and inspired by Derek Bailey, Keiji Haino. All the material is made by me, the guitar, bass, mix or master and it’s basically a continuation of the first album, but in a minimalist, personal version.

“Do we know ourselves—our “self”? How are we supposed to be ourselves if we are not our selves? And how can we be our selves without knowing who we are, such that we are certain of being the ones we are?” (M. Heidegger)

Life is a pillow on which if you fail to lay your head on and to fall asleep, if you ignore your inner voices, it can suffocate you as a criminal act in a bad Hollywood movie. With this “beautiful” thought I adjust my feelings and hit the play button, so I can listen to this first song.

The human being, the nature, the universe, all arising out of nothing, mediated only by an unknown will, are actually forms of regret and doubt. I was talking with Raul about his music, and he said that “it’s a complete improvisation. It knows no boundaries, it respects no rules, no theories, but it’s just an intuition of the moment that was caught and recorded and that can never be repeated ever again.”

The fact that this performance can never be repeated, it only brings quality and uniqueness, and the project wants to be a continuation of Raul’s musical experiment Bosses Hang Collective, however I see it more of an introduction. The music’s simplicity and not being presented in a specific genre it shows the exact amount of sincerity this artistic act needs. Even if I don’t quite believe that art is a sincere statement of feelings, well, here the things are exactly the opposite.

In the guitar’s tone are so many shadows and blurred lights, like a misunderstood painting that makes you wonder about this and that. Formed from depths, the light is foul, as a newborn only separated from his mother’s womb with all sort of remains that may seem inhumane. Well, inhumane, but not lacking of feelings; that’s how I feel about “Lumea Lumeşte”. It’s about the laziness and lack of life one may hide walking back and forth just to avoid standing. One way to exist just because death is not a cool phenomenon at all.

The artwork is a picture of a room and from a moment in time that has a great significance for me.

“And the too much of my speaking: / heaped up round the little / crystal dressed in the style of your silence.” (Paul Celan)

Only now I can say I understand the cover image. The mess that embraces the outer world comes from the tidiness which in fact, seeks to sit inside us. Yes, I know, it’s frightening and this cold shiver we’re feeling down our spine is aroused somehow by the shabby chords of the guitar. It will soon blossom a kind of alienation, a detachment that feel, and I emphasize the word, known.

I once read or listened, can’t remember for sure, that life’s a disease. Or that it should be so. Only in the agonizing embrace of illness you feel that life should have a purpose and meaning. Other than the one you imagined or induced those around you. That only in this mess where all the sweaty clothes are thrown on -you wonder what- lamp, where an ajar book whispers something from under the bed… only here new impulses are born, only here the noise becomes music, and life, similar to a child, sits still in the middle of the living room that itself it’s your body and it spins the pieces of a puzzle only you can know about. 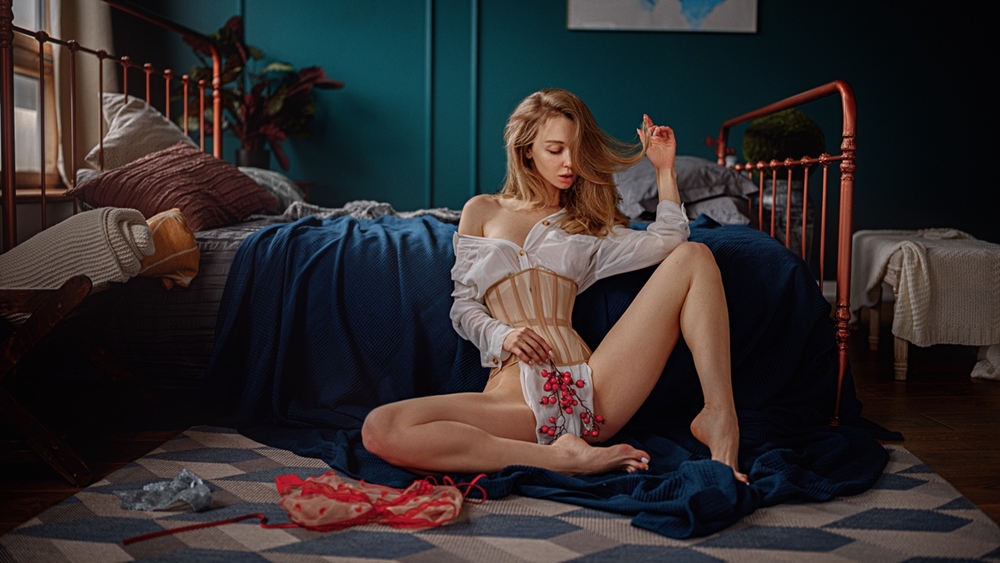 [NSFW] The Sense of Perfection and Sensuality in GEORGY Chernyadyev’s Photography.